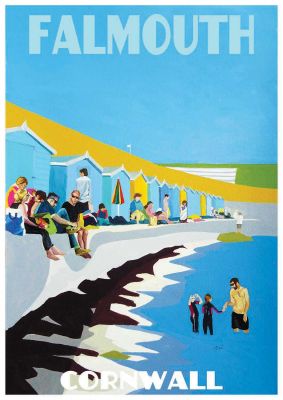 Apart from the campsite, Falmouth was the first stop in our Cornish exploration.  We travelled here from our camping base on the Lizard Peninsula on a fabulously sunny day, with neither a cloud in the sky or a breath of wind.  How wonderful!  (We thought until we got completely lost - turns out the place was considerably bigger than anticipated!)  Eventually we got into the centre, where we met my friend Anna – who was our main reason for coming.

Anna, though born in Cornwall, was an old friend of mine from the time I spent wintering in the French Alps. Fast forward to October 2018 and back to Cornwall; she was diagnosed with cervical cancer aged just 38. She began treatment – chemo and radiotherapy from which she suffered several side effects, including the loss of all her hair. On New Year’s Eve of the same year, she suddenly began to feel incredibly unwell. Luckily, she was with family at the time, who immediately called an ambulance, which rushed her to hospital in Truro. It turned out that Anna was having a massive stroke, caused by a blood clot that was brought on as a result of a mastoiditis infection. Her family were told to say their goodbyes – it was expected that she wouldn’t make it through the night. But Anna is one seriously tough cookie. She made it through, and finally woke again 12 days later.

However, all was not well. Anna had lost movement in her right arm and leg, along with her speech and much of her memory. She couldn’t see properly either. She literally had to learn to walk, talk and remember all over again, all the while continuing with her cancer treatment. But she kept positive, kept working and never, once considered giving up. When I asked her what being in a coma felt like, she said ‘I just felt really peaceful’. She is literally one of the bravest people I’ve ever known. And this trip to Falmouth was the first time I’d seen her since the stroke. I am glad to say that she was, and still is doing marvellously.

Anyway, back to the art bit… After a wander to the port, we headed to Pendennis Point. The views from up on the point were spectacular, but a bit too distant to make a striking painting from my point of view. From there, Anna took us down to Castle Beach, which as a local she recommended because of its calm waves and beautifully coloured water. ‘I have great memories of playing here as a kid’, she said. And she was right – it was a nice spot and made a fine subject with its rows of beach huts and happy visitors. When it came to actually making the image: for the purpose of the composition, I played with the perspective a bit to get the beach huts and the sea wall in at the same angle. The bright yellow of the bank behind it is a slightly fiddled representation of the sundried grasses that were actually there (I just liked the colour). We recommend the café kiosk at this beach – dead simple, but nice cake. *While Anna has made a miraculous recovery, her life is still irrevocably changed. She can’t work for the moment, so instead is dedicating her time to fundraising for various cancer charities. You can read more about her story here: Cancer complications led to stroke for Cornwall travel writer | Falmouth Packet

All artwork featured in my blog is available to purchase from my Shop!

For a long time, I was more aware of the French ‘Mont St Michel’ in Normandy than I was of our own smaller version. In fact...