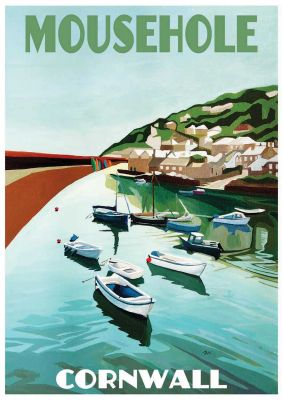 ‘MOU.ZEL. it’s pronounced MOU.ZEL,’ says Anna.  ‘You should definitely go there, it’s great.’
‘It does sound great’, I say. ‘By the way that’s really good pronunciation for someone who calls Fruit Pastilles, fruit bastards.’

For anyone joining this post, this is an extract of a conversation I had with my friend Anna before visiting Mousehole. Anna had a severe stroke at the age of the 38 following cancer treatment, from which she thankfully recovered (see post #1 Falmouth for the full story). The stroke has had a lasting impact on her life and one of the things she now lives with on a daily basis is Aphasia - a communication and language disorder. Basically, she muddles her words. And ‘fruit bastards’ is one of the classics in my opinion. *Just to make clear while we are here* – as with everything in life, Anna embraces this new facet of her personality with great humour and warmth and shares these things openly. So, with the spirit of raising awareness and helping others understand, she has given me permission to reproduce extracts from her new vocabulary. Here are some of my favourites:

Right, back to Mousehole. When I sit down now and think about Mousehole now, five months on from our visit – apart from it being beautiful, historic etc. there are two main things that really stick in my head. One – the name. Two – the traffic. So I’m going to start with the traffic.

What a nightmare! And I thought the Lake District was bad for it. When Tom and I used to live in Great Langdale, come high season, most of the locals would abandon their cars and get on their bikes. You’d still be weaving through people, cars and piles of smashed-up wing mirrors, but at least you could actually get somewhere, and so could the tourists eventually. Mousehole, however, seems to be in a league all of its own on this front. Total chaos, total carnage, lack of parking, lack of signage on route warning about difficult access and a lack of parking. Streets absolutely choked up with fuming vehicles, people sitting around in yards and on benches breathing it all in (inhaling twenty Chesterfields would probably do you less damage). This must drive local residents absolutely batty, but there seems to be very little happening to mitigate the problem or inform arriving visitors about it. So, here’s my bit to inform: any would-be tourists - park in the roadside parking before the village and walk, or get the bus! Or just don’t bother!

So on to the name. This was one of the main reasons we decided to visit Mousehole in the first place. It just seemed impossible to resist! The name ‘Mousehole’ is certainly old. As a village or town it appears on maps of Cornwall that date as far back as the 14th century. But the word itself is clearly English… so how did that come about, when the locals all originally spoke Cornish? Well, some say that answer to this question is that the word ‘Mousehole’ is actually a Saxonised version of the older Cornish place name ‘Moesyhale’, meaning ‘young woman’s brook’. This would probably make sense, given that the 14th century marked the beginning of a decline in the number of native Cornish speakers and the steady encroachment of English. Others say, however, that the town was originally called Porth Enys in Cornish and was in fact re-named Mousehole at some point in time. The latter name apparently having been derived from a nearby cave (must’ve been a really big mouse, that’s all I can say!) There’s also another opinion that Porth Enys was actually an entirely different place, which no longer exists. Confusing? Yes! But we love good place names, and we love intrigue…

As for my painting of Mousehole - this is a classic sort of view looking across from traffic hell corner to the far end of the harbour. Generally, I would normally try to put something in the foreground of a composition to help draw the eye through it, but that just wasn’t possible here. Instead, I ended up narrowing the harbour and moving the boats around. I like the end result - particularly the reflective quality of the water - but think I would arrange it slightly differently if I ever went back to do it again.
All artwork featured in my blog is available to purchase from my Shop!

For a long time, I was more aware of the French ‘Mont St Michel’ in Normandy than I was of our own smaller version. In fact...

Anna's Beach - Apart from the campsite, Falmouth was the first stop in our Cornish exploration. We travelled here from ....