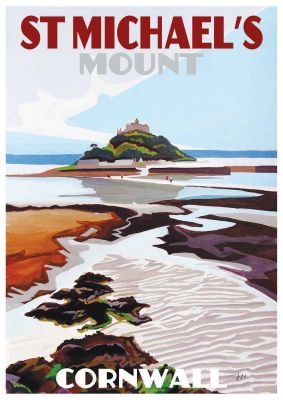 For a long time, I was more aware of the French ‘Mont St Michel’ in Normandy than I was of our own smaller version.  In fact, I am sitting here scratching my head trying to remember when and where I learned about the existence of St Michael’s Mount (this might sound terrible, but it must have been relatively recently!)  You see, as a family, we barely holidayed in the UK at all, apart from a couple of trips to Scotland while my brother and I were very young.  So really, I knew almost nothing of it until I moved back here and started looking around, after years of my own foreign exploits.

Mont St Michel, on the other hand, I remember precisely from a young age. This is because while we didn’t see much of England, we did get on the cross-channel ferries and travel to France for three weeks every summer. When we went, we drove across in a pea green coloured Transit van, towing a tiny Monza caravan. The caravan was fondly referred to as ‘the egg’ or ‘petit oeuf’ by my mum. The Transit was called Transitorius by my dad (I think this was an amalgamation/derivation of some type of dinosaur name, which was very apt – it may as well have been Jurassic given how old it was and how often it broke down). When it came to packing, dad always spent more time gathering tools and spare gear boxes than the usual holiday stuff, most of which had been put to necessary use by the return journey. Conveniently, this newly freed-up space would always end up crammed with crates of Kronenbourg beer and cheap French wine, stockpiled for boozy nights to come.

Anyway, the first time I saw Mont St Michel, I believe, was on the very same trip that the Transit conked out on Cherbourg hill as we exited the ferry. Some part of the exhaust system had fallen off and was scraping along the road. Mum was having a meltdown. And if memory serves me rightly, the damage was repaired by dad, who cable-tied a bunch of empty baked bean cans over the hole, while other ‘kind’ Brits drove past shouting ‘you bl*ody gypos’. Not surprisingly, we ended up camping nearby (!) and must have visited Mont St Michel at some point not long after that. On the day we went, I remember walking with my parents and brother along the road across that great sweeping bay. The vista was so impressive - ‘Le Mont,’ with its great soaring spire was like something out of a fairy tale. And Cornwall’s own Mont, while smaller, in my mind is certainly no less impressive. The fact that they are also linked historically, makes them both all the more interesting.

Back to our current trip, and it was another fine September day. We’d driven from our campsite on the Lizard, across to Marazion (no break down and no bean cans!) There were a few clouds in the sky, but it was beautifully warm and there were plenty of people about. We parked on the edge of Mounts Bay, just outside of town and wandered along the beach. It was wonderful to finally see the place. When we arrived opposite the island, the tide was quite low and there were great swathes of rippled sand. The causeway bisected the view and there were people messing about on the raised cobbles, which were partially submerged. I’m not sure what they were all doing out there, half way across the bay, but looked like they may have been waiting for the tide to go out (only to find it was doing precisely the opposite). There were cries of ‘Arg, ah, me shoe’s wet’ and ‘Jean, it’s floating away!’ from some; while others legged it and the rest just paddled about while looking on in amusement. It was all very striking.

*Tip for anyone trying to paint shaded wet sand – the colour you’re looking for is a purple based grey or taupe. I think I used raw umber, permanent rose and titanium white.

All artwork featured in my blog is available to purchase from my Shop!

Anna's Beach - Apart from the campsite, Falmouth was the first stop in our Cornish exploration. We travelled here from ....